Cauliflower belongs to the Brassicaceae family, which also includes broccoli, kale, and cabbage. Cauliflower derives its name from Latin caulis which means cabbage with a flower. The florets on the head of the cauliflower, also known as curd, are tightly clustered and consist of immature flower buds attached to a central stalk. To protect the flavor and softness of the cauliflower heads, they are protected from the sunlight to prevent development of chlorophyll pigment and over-maturity.

Cauliflower has been suggested to be native to ancient Asia, but re-emerged in the Mediterranean region, Turkey, and Italy around 600 BC. Around the mid-16th century, cauliflower achieved recognition in France and Northern Europe. Today, India, China, Italy, France, and the United States are among the top producers of cauliflower throughout the world.

Cauliflower is an excellent source of vitamin C (ascorbic acid), folate, vitamin K (phylloquinone), and vitamin B-6. Vitamin B1 (thiamine), B2 (riboflavin), B3 (niacin), and E (alpha-tocopherol) are also present in small quantities. Cauliflower provides vital minerals such as calcium, magnesium, phosphorous, potassium, and manganese without adding any harmful cholesterol. It is a source of protein and offers very low amounts of fats. A substantial amount of the fat it does contain comes from unsaturated fats and essential omega-3 fatty acids. It also provides dietary fiber and contains a small amount of natural sugars as compared to other members of its botanical relatives, such as broccoli.

Green cauliflower is also referred to as broccoflower. It can be found in normal curd shaped form as well as in a spiky variant called Romanesco broccoli.

The antioxidant group anthocyanins present in the purple cauliflower provides the color for this variety.

Orange cauliflower is very nutritious and contains immense amount of vitamin A, as compared to the white variety. 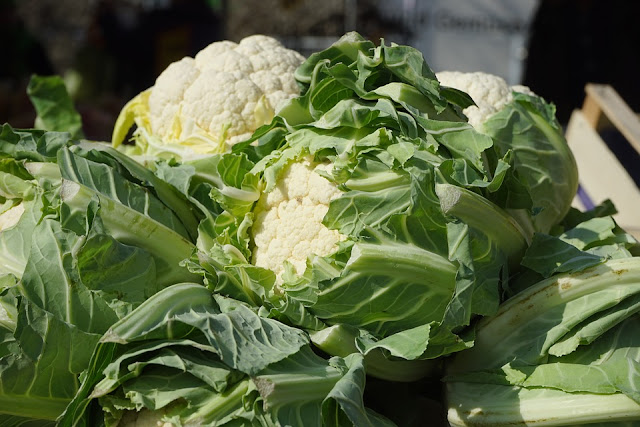 Besides the delicious savory taste, cauliflower offers great nutritional value that can be attributed to the presence of power-packed phytochemicals that help in fighting various diseases and promote stronger immunity, while aiding in the maintenance of a clean system.

Brassica vegetables, such as cauliflower, contain vitamin C, manganese, and other potent antioxidants that help in imparting nourishment across a wide array of healthful categories.Cauliflower also contains phytochemicals, called indoles and glucosinates, namely glucobrassicin, glucoraphanin and gluconasturtiian. These healthful components stimulate cancer-blocking enzymes and protect the body cells from the oxidative stress and damage caused by free radicals.

Cauliflower contains vitamin K, which possesses anti-inflammatory qualities. Regular consumption of cauliflower ensures healthy blood circulation and helps in maintaining the blood vessels, which can be attributed to the presence of glucoraphanin. Glucoraphanin is converted to isothiocyanates that activate anti-inflammatory activities and prevent the accumulation of lipids in the blood vessels. This aids in the unobstructed flow of blood, which reduces the risk of conditions like atherosclerosis and promotes cardiovascular health. Isothiocyanate, indole-3-carbinol, or I3C is an anti-inflammatory component that functions at the genetic level and inhibits the instigation of inflammatory activities at an early stage. As supported by various studies, indoles have been proven to be effective on the synthesis of lipids, the levels of triglycerides, cholesterol, and in maintaining cardiovascular health. Research has also proved that the anti-thrombotic and anti-platelet function of Indole-3 –carbinol contributes significantly towards a healthy heart. The omega-3 present in the form of alpha-lenolenic acids in cauliflower also contributes to this beneficial activity.

Cauliflower is a source of dietary fiber that aids in digestion and promotes the elimination of toxins from the body. The presence of glucosinolate, glucoraphanin and sulforaphane incauliflower protects the stomach lining and helps in resisting the growth of Heliobacter pylori bacteria. In addition to this defense mechanism, dietary isothiocyanates in cauliflower prevent the risk of various abdominal disorders such as stomach ulcers and colon cancer.

Cauliflower contains glucosinolates, which break down to provide healthful compounds such as sulforaphane and isothiocyanates, called indole-3 carbinol. Studies have shown that these compounds have chemo preventive and anti-estrogen effects that help in hampering the growth of cancer cells. Research has provided supporting evidence for the fact that consumption of brassica vegetables such as cauliflower assists in reducing the risk of various types of cancers such as lung cancer, bladder cancer, breast cancer, prostate cancer, ovarian cancer, and cervical cancer.

Cauliflower contains vitamin C, which plays an important role in the production of collagen, which protects the joints and bones from inflammatory damage. Also, it contains vitamin K, which may help in preventing bone loss in both men and women.

Cauliflower is rich in vitamin C and antioxidants, so it may also be effective in reducing the risk of age-related macular degeneration (AMD) which can lead to blindness, particularly in the elderly. The sulforaphane present in cauliflower protects the retinal tissues from damage caused by the oxidative stress, prevents vision impairment and various eye ailments such as cataracts.

Inclusion of cruciferous vegetables such as cauliflower is extremely important for the body’s detox system. Cauliflower contains Indole-3-carbinol, a phytonutrient that, along with sulforaphane, helps in activating and regulating the function of detoxifying enzymes.

Research studies have shown that the sulforaphane present in cauliflower is effective in protecting the skin against the damage caused by ultraviolet radiation. The protective action of sulforaphane defends the body against inflammations, skin cancer, UV-induced erythema, and cellular damage.

The sulforaphane and indoles present in cauliflower play a key role in reducing the progression of neurodegenerative diseases. They activate the detoxification enzymes, which elevates the level of glutathione and helps in treating the neuronal injuries caused by inflammation and oxidative stress in Alzheimer’s and Parkinson’s diseases.

The antioxidant and anti-inflammatory properties of the glucoraphanin and sulforaphane present in cauliflower help in reducing the oxidative stress, along with the levels of LDL and total cholesterol. It also promotes the stimulation of HDL cholesterol and lowers the blood pressure. In addition to this, the fiber and omega-3 fatty acid present in cauliflower also aids in the reduction of bad cholesterol and prevents hardening of the arteries.

Cauliflower contains potassium, which is one of the major electrolytes in the body. The potassium content helps in maintaining the electrolyte balance in the body, which is essential for the functioning of the nervous system in the transmission of nerve impulses and muscle contractions.

Cauliflower is rich in antioxidants and immune-strengthening nutrients. Along with other healthful components, the presence of vitamin C in the cauliflower helps in preventing various kinds of infections and strengthens the defense mechanisms of the body by hampering the growth of disease-causing inflammation.

Cauliflower contains healthful components such as indoles, which possess anti-obesity effects. Studies have supported the fact that consumption of cauliflower is beneficial in preventing various inflammation and metabolic disorders in the body. It also helps in the stimulation of fat-burning thermo genesis and prevents obesity.

Cauliflower contains choline and phosphorous, which are both effective in the repairing of cell membranes. This is essential for the efficient functioning of the brain and nervous system for transmitting nerve signals. In addition to this, the presence of potassium and vitamin B-6 in the cauliflower also plays an important role in maintaining brain health and promoting proper communication in the nerves by producing a range of required neurotransmitters, including dopamine and nor epinephrine.

The regular intake of cauliflower helps in reducing the risk of diabetes due to the presence of vitamin C and potassium. The potassium content in cauliflower helps in regulating glucose metabolism. It is also utilized by the pancreas for secreting the insulin hormone for taking action against the raised levels of blood sugar in the body. Low levels of potassium in the body can eventually elevate the levels of blood glucose and pose a major threat for diabetics. In addition to this, studies have supported that the vitamin B-6 present in cauliflower is also effective in enhancing the tolerance of glucose in patients with gestational diabetes.

Studies have suggested that extracts from cauliflower exert anti-inflammatory effects on the symptoms of ulcerative colitis. This protective effect can be attributed to the presence of phenethyl isothiocyanate, which exerts a healing effect on the damage that has occurred in colon tissues and the colon epithelium.

Research suggests that the consumption of white flesh fruits and vegetables such as cauliflower helps in reducing the risk of stroke, due to the presence of the compound allicin, which also aids in the cleansing of the liver and the blood.

Cauliflower is a versatile vegetable that can fit smartly in the menu as a side dish or in a main course in diverse cuisines all across the world. It can be lightly steamed or micro waved or it can be combined with other vegetables such as potatoes and peas for a delicious stir fry. Cauliflower can also be added to soups or can be shredded and used as a stuffing in the paranthas (stuffed Indian bread).


Inclusion of cauliflower in the diet is beneficial during pregnancy due to the presence of essential folate, which helps in healthy neural development of the baby. Cauliflower also has various other essential vitamins and minerals, including fiber, which promote overall health.

Cauliflower also promotes hair growth and healthy skin, due to the presence of sulphur and silicon, which also promote the development of blood hemoglobin in the body.

Cauliflower is a versatile vegetable that brings a nice flavor along with low-calorie nutrition to the diet. Hence people who want to lose weight can add it into their diet as low calorie meal.

Cauliflower are clean tightly bundled creamy white florets with bright green leaves are the best ones to pick. Yellow, spotted florets with saggy leaves are the ones devoid of nutrition and freshness. Dark colored patches on the cauliflower may also indicate the presence of a mold disease known as downy mildew.

Cauliflower is rich in vitamin K, which is utilized by the body for normal blood clotting. It can interact and reduce the effectiveness of anticoagulants like warfarin and coumadin which are prescribed to prevent the clotting of blood in the body. If taking anticoagulant drugs, it is always advisable to discuss the dietary intake of foods rich in vitamin K such as cauliflower with a health professional.

Side Effects Of Cauliflower

Cauliflower contains complex carbohydrates that do not get broken down entirely in the digestive tract. These carbohydrates are fed upon by intestinal bacteria. This can sometimes result in bloating and the release of odorous gases such as hydrogen and carbon dioxide.

Cauliflower contains purines, which can cause various health concerns if consumed in excess. Purines break down to form uric acid and the excessive intake of purine-rich foods can lead to a buildup of uric acid in the body. This can further pave the way for uric acid-related problems such as kidney stones and gout. It is advisable for people with such complications to limit their intake of purine-rich foods like cauliflower.

Cauliflower may prompt anaphylaxis in some people, which means causing a severe bodily allergic reaction to a substance. Warning signs of such allergic reactions include swelling in certain body parts, itching, dyspnea, and breathing complications. It is always advisable to discontinue the usage of cauliflower in the occurrence of such critical symptoms and seek medical attention immediately.

Inclusion of cruciferous vegetables such as cauliflower in the diet would go a long way in providing multiple benefits to almost any lifestyle.