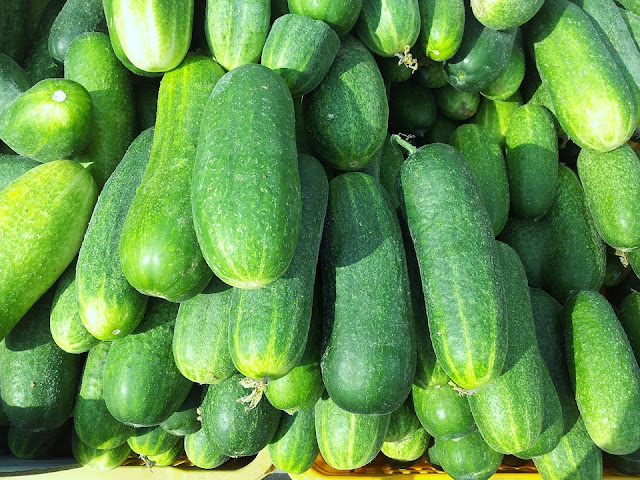 Scientifically known as Cucumis Sativus, cucumbers belong to the same family as zucchinis, watermelons, pumpkins, and other types of summer squash. The plant where cucumbers grow is a creeping vine that develops the cylindrical, edible fruits throughout the year.  You will find different varieties of cucumber grown in different regions, and they are usually eaten fresh or pickled. Cucumbers typically eaten fresh are called slicing cucumbers. Gherkin cucumbers are specially produced to make pickles.
These are much smaller in size than slicing cucumbers. Slicing cucumbers are available throughout the year, but they are at their best between May and July. Cucumbers are now cultivated in many different countries and continents. Recently, different varieties of cucumbers are traded on the international market and you will find them in abundance all year long.

In the ancient civilizations of Egypt, Greece and Rome, cucumbers were very popular, and their uses were not limited to just being food. It was also praised for its beneficial effects on the skin. Louis XIV also cherished cucumbers greatly, and the process of cultivating cucumbers in greenhouses was invented during his time to make sure he was able to have a steady supply of the enjoyable vegetable during any season. The American colonists also took this variety of crunchy and healthy squash to the United States.

Cucumbers are extremely beneficial for overall health, especially during the summer since it is mostly made of water and important nutrients that are essential for the human body. The flesh of cucumbers is rich in vitamins A, C, and folic acid while the hard skin of cucumbers is rich in fiber and a range of minerals include magnesium, molybdenum, and potassium. Additionally, cucumber contains silica, a trace mineral that contributes greatly to strengthening our connective tissues. Cucumbers are known to heal many skin problems, under eye swelling and sunburn. Cucumbers also contain ascorbic and caffeic acids which prevent water loss, therefore cucumber is frequently applied topically to burns and dermatitis.

Main Features and Varieties of Cucumbers

You are probably familiar with the phrase “cool as a cucumber”, which speaks directly to the soothing and cooling nature that cucumbers have when eaten. Cucumbers are grown mainly to be eaten fresh. These cucumbers are usually cylindrical in shape and vary in length from about six to nine inches. However, the size of cucumbers varies according to a variety of cultivating factors as well.

The skin of the cucumbers can vary in color from green to white, and sometimes it may be smooth or ridged depending on the variety. Inside the cucumber skin, you will find pale green flesh that is thick yet aqueous and crispy at the same time. The interior core of cucumber has numerous, edible fleshy seeds. Many cucumber varieties are also grown in greenhouses; they are seedless and have thinner skins and longer lengths, usually between 12 and 20 inches. Often known as “burpless”, this variety of cucumbers is bought by majority, since it is easier to digest than the other kinds of cucumbers.

Here is a list of top 20 health benefits of cucumbers.

If you are too busy to drink enough water, munch on the cool cucumber, which is 96 percent water. It will cheerfully compensate.

2. Fights Heat, Both Inside And Out:

Eat cucumber, and your body gets relief from heartburn. Apply cucumber on your skin, and you get relief from sunburn.

All that water in cucumber acts as a virtual broom, sweeping waste products out of your system. With regular use, cucumber is known to dissolve kidney stones.

4. Lavishes You With Vitamins:

A B and C, which boost immunity, give you energy, and keep you radiant. Give it more power by juicing cucumber with carrot and spinach.

The silica in cucumbers helps to strengthen the connective tissues around muscles and joints.

That’s why cucumber-based treatments abound in spas. Vitamin K, iron, and calcium all contribute to energy and glowing skin.

Enjoy cucumbers in your salads and soups. Try crunchy cucumber sticks with humus.

Placing chilled slices of cucumber on the eyes is a cliched beauty visual, but it really helps reduce under-eye bags and puffiness.

Cut down your risk of several cancers by including cucumber in your diet. Several studies show its cancer-fighting potential.

Chewing cucumber gives the jaws a good workout, and the fiber in it is great for digestion.

Silica, the wonder mineral in cucumber makes your hair and nails stronger and shinier.

Eat a few cucumbers before bed to replenish your body with sugar, B vitamins, and electrolytes and reduce the intensity of your hangover.

All those vitamins and minerals in cucumber make it a powerful enemy of muscle and joint pain.

Patients of diabetes can enjoy cucumber while also reaping its health benefits: cucumber contains a hormone needed by the cells of the pancreas for producing insulin.

The aroma from boiling cucumbers and water will calm you down from the inside out.

It is still unknown when cucumbers began to be used for pickling, but researchers have speculated that the gherkin variety of cucumber was developed from a native African plant. Spain was one of the countries during ancient times that started pickling cucumbers, since Roman emperors imported them from this Mediterranean country.

The health benefits of cucumber are not widely known in many cultures. The taste of fresh cucumber is somewhat bland in comparison to other squashes, but it’s thirst quenching, and the cooling quality of this squash is truly refreshing. Cucumbers often act as antioxidants when you consume them with barbecued and fried foods. You can also drink a glass full of cucumber, carrot or orange juice. This will not only give you its wholesome nutrient value, but it is also a unique tasty treat.

Cucumber benefits range from preventing acidity to keeping skin well-toned. Cucumber has high alkaline levels, thus regulating the body’s blood pH and neutralizing acidity. Patients with gastric issues should consume cucumbers frequently. It regulates blood pressure and contributes to the proper structure of connective tissues in our body, including those in the muscles, bones, ligaments, cartilage, and tendons. During the summer, cucumbers help to normalize body temperature. Cucumber juice is diuretic, so it is able to prevent kidney stones. Cucumbers also counter the effects of uric acid, which prevents inflammation in from conditions like arthritis, asthma, and gout. You will be quite surprised to know that this squash also promotes healthy hair growth and can treat skin ailments like psoriasis, eczema, and acne.

Cucumber is rich in silica, which is the essential component that aids in developing strong and healthy connective tissues in the muscles, ligaments, tendons, cartilage, and bone. Doctors often recommend cucumber juice because of the silica content to create healthier and brighter skin. Cucumber’s high water content makes it naturally hydrating, and it is well known that moisture is the best friend to healthy skin, so why not acquire the hydration naturally? The extract of cucumbers is often used topically for treating various types of skin ailments, including sunburn and swelling under the eyes. Ascorbic acid and caffeic acid are the two vital compounds in cucumbers that prevent water loss from the body. These are some of the reasons why cucumbers are applied topically for various skin problems.

Cucumbers are a perfect blend of both fiber and water. Therefore, it helps to protect your body from bothconstipation and kidney stones. By drinking cucumber juice, you can consume both fiber and water at the same time. Reports say that the majority of Americans prefer to have a cucumber rich salad regularly as it is a great way to increase your fiber intake. Cucumber is also a good source of vitamin C, silica, potassium and magnesium; which all have their own health benefits. Cucumbers have an extraordinary amount of water (about 96%) that is naturally purified, thus making the water content much higher in quality than ordinary water. Cucumber skin contains high levels of vitamin A, so you will gain more nutrition if you eat the entire thing, skin and all.

The studies done at DASH (Dietary Approaches to Stop Hypertension) consisted of people consuming foods high in magnesium, potassium, and fiber. The results were clear; their blood pressure lowered to to normal levels. The group eating a diet rich in these complexes along with the other foods on the diet like seafood, low fat dairy items, lean meat and poultry saw that their blood pressure fell by 5.5 points (systolic) over 3.0 points (diastolic).

Cucumbers have been useful for diabetic patients for many years. Cucumbers possess a hormone required by the beta cells during insulin production. The Glycemic Index of cucumbers is actually zero. The presence of carbohydrates and their result on the body is measured by the quantity Glycemic Index. Every food item contains essential nutrients in different percentages. The carbohydrates contribute in raising the glucose level, however the carbohydrates present in the cucumber can be easily digested by diabetic patients. Thus, consumption of cucumbers keeps the glucose level in check. Nowadays, most commercial stores have cucumber supplements as spiny sea cucumber extract powder, which is very effective in combating the effects of diabetes.

5. Keeps the Body Healthy and Functioning

Cucumbers have excellent cleaning properties, and actively remove accumulated waste and toxins from your body. In many cases, cucumbers have been shown to be an effective treatment for arthritis since it removes uric acid. Since it aids in urine secretion, cucumber is considered a natural diuretic. Cucumbers are very good for optimizing urinary bladder, kidney, liver and pancreatic functions. Cucumber juice along with carrot juice is extremely effective for rheumatic conditions caused by excessive uric acid in the body. It is good for digestion, especially of proteins, and it controls blood pressure and diabetes mellitus. Drinking cucumber juice on a regular basis also helps to cure gout and eczema. If you are having lung or stomach problems, be sure to add cucumber to your diet. It also promotes muscle flexibility, while the magnesium content of cucumbers ensures proper blood circulation and relaxed nerves. Since cucumbers are so rich in minerals, it even prevents splitting of the nails on the fingers and toes.

How to Buy and Store Cucumbers?

Cucumbers are very sensitive to heat, so try to select the ones which are displayed in the refrigerated cases in the store. Look for firm cucumbers and check if the color is bright medium green to dark green. Avoid the yellow, puffy cucumbers that have sunken water-soaked areas or wrinkled tips. You will find less seeds in the thinner cucumbers.

If you store the cucumbers in the refrigerator, they will retain their freshness for a longer time. If the entire cucumber is not used in one meal, then wrap the remainder tightly in plastic or place it in a closed container so that it does not get dried out. Try to eat cucumbers within one or two days of buying them, or else they will become limp, especially if kept for more than week.

No matter how you eat it, you are sure to get a whole lot of nutrition from this truly “cool” vegetable.