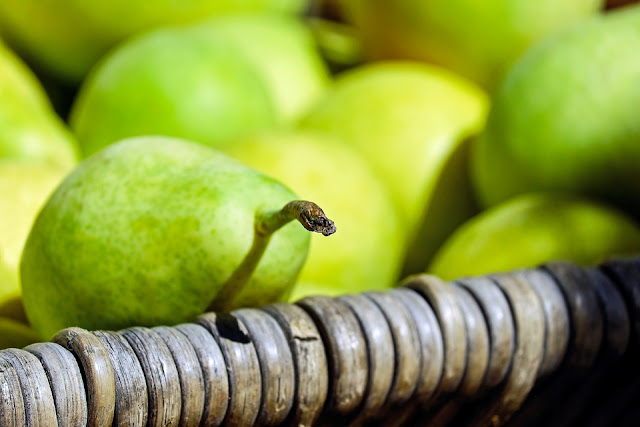 Pear trees are very promiscuous; they cross-pollinate very easily. That's why there's close to five thousand varieties being grown. But no panic: there's no test on this tomorrow and besides, you're lucky if there's even ten that make it to your store shelves on a regular basis.

The fruit is the upper end of the flower stalk, and is typically pear shaped, narrow at the top (stem) and wider at the bottom, however, this is not the way to ultimately determine a “pear” variety. Some pears are shaped just like apples! The appearance of the flesh inside the skin is also similar to apples, although it is a slightly grittier consistency, due to the presence of stone cells. This is one of the most obvious differences between the two fruits, as well as the taste.

While most people like the fragrance and taste of Pears, many won't eat them. Most will give just about the same reason: they dislike the mealy, gritty texture. This exasperates Pear lovers, who will point out that they're Pears, after all, not bananas. While Pear producers must appreciate this spirited defence, it doesn't actually help them if the legions of Pear-dislikers keep on walking by.

Producers call the grittiness "stone cells." It's not entirely understood what causes the stone cells, but they may be caused by lignin and cellulose in the fruit. Producers have been trying for some time now to breed out this grittiness. Still, despite decades of selective breeding, trees will occasionally get hit by what is called "stony pit virus" and revert to producing gritty fruit: the condition can't be prevented, and the tree must be destroyed.

What has been discovered, however, is that Pears harvested before they ripen on the tree tend not to get as mealy and gritty. And, in a happy coincidence, Pears survive shipping to stores much better if they are hard and unripe. So, that's why the Pears you buy at stores need to be taken home and ripened.

Many people are still leery of biting into a Pear, despite the early-picking precaution. Their mouth still remembers vividly that off-putting sensation of the time they had a mealy Pear. And while they haven't made an active decision to hate them, or avoid them, they just don't put them in their grocery basket. Asian Pears, now still yet a novelty in North American and UK grocery stores, may be the salvation for the Pear market, as they never go gritty.

Pears have never been quite as popular as apples, both because of their texture, and because they don't store as well as apples -- they have a far shorter shelf life.

To tell if a Pear is ripe, try pushing the stem in a little bit. If it looks like it will start to go in easily, then the Pear is ripe. Pears ripen from the inside out.

Pears are an integral part of the fruit diet of many cultures around the world, and these oddly shaped and succulent fruits certainly provide a lot of nutritional value and medicinal benefits. The term “pear” actually describes a number of trees and bushes in the genus Pyrus, of the larger family Rosaceae.  There a wide variety of pear trees, and a few of them bear edible fruit that is commonly consumed by humans; a number of pear varieties are only used as decorative trees and shrubs.

It is native to the Old World, mainly Europe, North Africa, and Asia, and there is evidence of it being consumed since prehistoric times. It was unclear whether European varieties moved east, or if Asian varieties move west and south from China, but evidence seems to point to China as the ultimate source of pears. It has been a part of international diets for thousands of years, and has been found in Celtic literature, Roman history, and Chinese lore. Its ability to grow easily in places with temperate, cool climates makes it very versatile and rather easy to cultivate.

Pears are valuable fruits that have been widely used and savored for their delicious flavor since ancient times. Beyond being a tasty addition to the diet, pears are also packed with nutrients and nutritional value. Some of the health benefits of pears include their ability to aid in weight loss, improve digestion, improve heart health, regulate the body’s fluid levels, reduce blood pressure, increase cognitive ability, prevent cancer, promote wound healing and tissue repair, defend against birth defects, boost the immune system, reduce inflammation, increase the metabolism, improve circulation, protect against osteoporosis, while guaranteeing healthier skin, eyes, and hair.

Besides their availability and flavor, pears have also been valued for their medicinal benefits for thousands of years. Modern science now tells us the contents of the fruit, and the mineral, vitamin, and organic compound content of pear species is the reason for its vast health potential. Some of these active and effective components are potassium, vitamin-C, vitamin K, phenolic compounds, folate, dietary fiber, copper, manganese, magnesium, as well as B-complex vitamins.

The fleshy and fibrous pear fruit has a very important role to play in human digestion. With a single serving of pears providing 18% of the daily requirement for fiber intake, they can be a very strong agent for digestive health and function. Most of the fiber in pears is non-soluble polysaccharide (NSP), which means that it acts as a bulking agent in the intestines. It accumulates the food and adds bulk so it is easier to pass through the intestines. Furthermore, it stimulates secretion of gastric and digestive juices so food moves smoother, in a more digested state. It regulates bowel movements and reduces the chances of constipation, as well as diarrhea and loose stool, since it adds that bulk to the bowel movements. Also, the gritty nature of pear fiber helps it bind to cancer-causing agents and free radicals in the colon and protects that organ from their damaging effects.

One of the complaints that some people have about various fruits is the calorie content, mainly derived from natural sugars. However, pears are one of the lowest calorie fruits; an average pear has just over 100 calories, which is 5% of daily calorie allowance of a healthy diet. However, the nutritional supplementation it gives you is immense, and the fiber makes you feel full. Therefore, people trying to lose weight often turn to pears to get the most “bang for their buck”. It is a high-energy, high-nutrient food with a low impact on weight gain and obesity.

Like many other fruits, pears are a wealth of antioxidants that combat various diseases and conditions within the body. Antioxidants work to eliminate the free radicals that accumulate in the body following cellular metabolism. These free radicals mutate healthy cell DNA into cancerous cells, and can cause a number of other devastating conditions. Therefore, antioxidant components of vitamin C, vitamin A, and flavonoid compounds like beta-carotene, lutein, and zea-xanthin, all of which are found in pears, can seriously help rid the body of these dangerous compounds.

Similarly, the immune system of the body is also boosted by the activities of antioxidants and vitamin-C. Vitamin C has long been known to be beneficial for the immune system, as it stimulates white blood cell production and activity. Traditionally, fruits like pears have been suggested to eliminate simply conditions like the common cold, the flu, or various other mild illnesses that a quick immune system boost could help cure.

Antioxidants are primarily praised for their anti-carcinogenic activities, and pears have been connected to prevention of a number of different types of cancer, including colon, rectum, breast, prostate, and lungs. This is not unique to pears, but they do have a high antioxidant score, compared to many other fruits.

Pears are a wonderful source of potassium, which means that pears can have a significant impact on heart health, because potassium is a well-known vasodilator. This means that it lowers blood pressure, which reduces strain to the entire cardiovascular system and makes it harder for clots to form or harm you. Furthermore, it increases blood flow to all parts of the body, which oxygenates the organs and promotes their effective function. Lowering blood pressure is also connected to a lower chance of cardiovascular diseases like atherosclerosis, heart attacks, and strokes. Finally, potassium works as a fluid regulator in the body, meaning that it keeps the various parts of the body hydrated, and ensures the balance of essential fluids in the cells and organs. Without potassium, many of our most essential functions would be either slowed down or stopped altogether.

Vitamin C is also an essential part of synthesizing new tissue in various organs and cellular structures of the body. This keeps the body metabolism running smoothly and ensuring that all functions operate properly. Furthermore, wound healing is sped up with high levels of ascorbic acid, so small injuries, cuts, and damage done by injuries and diseases can be fixed faster if you add high levels of this essential nutrient to your diet, which pears do provide. It also helps to repair damaged blood vessels, which reduces the strain on the cardiovascular system and prevents certain heart diseases from developing.

For patients that suffer from anemia or other mineral deficiencies, pears can be very helpful, due to its content of copper and iron. Copper facilitates and improves the uptake of minerals into the system, and increased levels of iron mean that red blood cell synthesis increases. Iron is an important part of hemoglobin and anemia is another name for iron deficiency. You can prevent fatigue, cognitive malfunction, muscle weakness, and organ system malfunction by consuming foods high in iron and copper, both of which are found in significant amounts in pears.

Folates are another of the valuable nutritional components of pears. Folic acid has been positively correlated with a reduction in neural tube defects in newborns, so eating folate-rich fruits like pears can protect the health and happiness of your baby, so pregnant women are always encouraged to monitor their folic acid levels.

The antioxidant and flavonoid components of pears can also induce anti-inflammatory effects in the body and reduce the pain associated with inflammation diseases. This includes the reduction in symptoms of arthritis, rheumatic conditions, gout, and similar conditions. Most fruits have these effects, although citrus fruits are not quite as effective.

The high mineral content of pears, which includes magnesium, manganese, phosphorus, calcium, and copper, means that you can reduce bone mineral loss and debilitating conditions like osteoporosis and general weakness of the body due to lack of support from the bones.

One of the most versatile vitamins in the human body is Vitamin A. Pears are high in vitamin A, and its subsequent components, like lutein and zea-xanthin.  They act as an antioxidant as well as participating in a number of enzymatic reactions and organ functions, pears can reduce the effects of aging on the skin, like wrinkles and age spots. This powerful fruit can also reduce hair loss, macular degeneration, cataracts, and various other conditions associated with the aging process.

How to Buy Pears?

How to Store Pears?

There are no known interactions or health risks with pears, although there are always ongoing studies. However, since some people suffer from allergic reactions based on certain types of fruit, monitor your body’s behavior and reaction if you do not normally eat pears, and only eat an appropriate amount, no more than one pear per day.