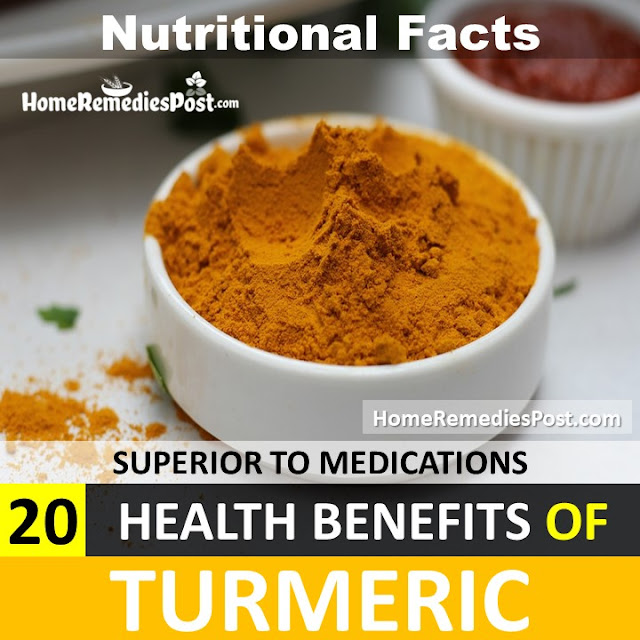 Turmeric is an herbal seasoning often added to recipes for the golden color it gives to food. The turmeric plant has a long history of medicinal use as well, and has been used to ease heartburn and stomach ulcers.

Closely related to other members of the ginger family, turmeric is a perennial herb that has the scientific name of Curcuma longa. The herb itself is derived from the rhizome of the plant, which is dried before the useful powdered form can be acquired. It needs a rather specific temperature and environment to thrive, so it is not widely cultivated throughout the world, but it is exported around the globe due to its desirability. The color of turmeric powder is perhaps the most striking characteristic, as it is bright yellow.

Turmeric smells slightly like mustard but has a hot, almost pepper-like bitterness to it that complements a variety of dishes and makes turmeric very popular in soups, sauces, curries, meat dishes, biscuits, rice preparations, and as a general spice flavoring for dozens of other cultural dishes and specialties.

This amazing herb has many benefits to our health, it has become a must in almost every kitchen pantry to keep ourselves and families full of energy and health.

Aside from its wide usage in food preparation, it has also been praised as one of the most comprehensive and powerful herbal medicines in Ayurvedic treatments and other traditional cultural remedies. Curcumin is the most important and active ingredient of this “super herb”. Turmeric juice is perhaps the most common form of the herb in medical use, but it can also be mixed into topical salves and creams. The essential oil of turmeric is also a powerful health agent.


What Are The Benefits Of Turmeric?

Check out the extremely good benefits it promotes:

1. It is a natural antiseptic and antibacterial agent, useful in disinfecting cuts and burns. If you make homemade soap, adding several teaspoons of turmeric to it will not only dial up its color, but will boost its skin-friendly benefits as well.

3. Prevents breast cancer from spreading to the lungs in mice.

4. Prevents melanoma and cause cell death in existing melanoma cells.

5. Reduces the risk of childhood leukemia.

7. May prevent and slow the progression of Alzheimer’s disease by removing amyloid plaque buildup in the brain. A clinical trial using curcumin extract published in the Journal of Neurochemistry found a 30 percent decrease in the size of Alzheimer’s-associated brain plaque in treated mice — in only one week.

8. May prevent metastases from occurring in many different forms of cancer. The active components in turmeric make it one of the best protectors against radiation-induced tumors. It also has a preventive effect against tumor cells such as T-cell leukemia, colon carcinomas, and breast carcinomas.

10. Has shown promise in slowing the progression of multiple sclerosis in mice.

11. Is a natural painkiller and cox-2 inhibitor.

12. May aid in fat metabolism and help in weight management. Turmeric powder can be very helpful in maintaining an ideal body weight. A component present in turmeric helps increase the flow of bile, an important component in the breakdown of dietary fat. Those who wish to lose weight or treat obesity and other associated diseases can benefit from having one teaspoon of turmeric powder with every meal.

13. Has long been used in Chinese medicine as a treatment for depression.

14. Because of its anti-inflammatory properties, it is a natural treatment for arthritis and rheumatoid arthritis.

15. Boosts the effects of chemo drug paclitaxel and reduce its side effects.

16. Research has proven that simply using turmeric as a food seasoning can reduce serum cholesterol levels. It is a known fact that high cholesterol can lead to other serious health problems. Maintaining a proper cholesterol level can prevent many cardiovascular diseases.

17. Studies are ongoing in the positive effects of turmeric on multiple myeloma.

18. Has been shown to stop the growth of new blood vessels in tumors.

19. Speeds up wound healing and assists in remodeling of damaged skin. Turmeric is a natural antiseptic and antibacterial agent and can be used as an effective disinfectant. If you have a cut or burn, you can sprinkle turmeric powder on the affected area to speed up the healing process. Turmeric also helps repair damaged skin and may be used to treat psoriasis and other inflammatory skin conditions.

20. May help in the treatment of psoriasis and other inflammatory skin conditions.

Let’s look at some more detailed Health Properties Of Turmeric:

One of the most well-known applications of turmeric is as an anti-inflammatory agent. The active ingredients in turmeric are extensive, but a particularly crucial compound is curcumin. This substance has received considerable attention in the medical community due to its potent anti-inflammatory abilities. In fact, the strength of this substance is likened to some of the strongest pharmaceutical options for reducing inflammation. For this reason, consuming turmeric is often suggested for the reduction of arthritic pain, gout, and muscle pain following exercise or injury. Turmeric can achieve this relief in either topical form or when normally consumed. A topical salve can also be made to reduce the inflammation of hemorrhoids.

Turmeric has long been used as a stomach soother, and is particularly useful for constipation, cramping, and irritable bowel syndrome.

The anti-inflammatory activity of curcumin also comes into play here, as it lowers the chances of developing ulcers, bleeding in the bowels, and generally eliminates irritation throughout the gut. Turmeric is often recommended for patients suffering from Inflammatory Bowel Disease and even more serious conditions, such as Crohn’s disease. The dietary fiber content found in turmeric, although not off the charts, is still significant and can help smooth your digestive processes.

If you suffer from severe menstrual discomfort, cramping, bloating, excessive bleeding, or mood swings, turmeric may be precisely what you’ve been looking for. The anti-inflammatory and soothing nature of the herb’s natural compounds can relieve most symptoms of menstruation.

Although this crippling, fatal disease is not discussed as often as cancer or heart disease, this particular condition attacks the lungs with thick mucus, as well as the pancreas. The curcumin found in turmeric has been shown to correct the protein-folding mutation that can cause the development of this deadly disease.

It seems that the whole world is searching for a cure for cancer, as well they should be, and turmeric is one of the best herbal approaches to the treatment or prevention of various types of cancer. Curcumin is a powerful antioxidant agent that has been directly linked with a reduction in colon cancer cells and is also a direct inhibitor for a protein that is essential for tumor growth. This makes turmeric a wonderful addition to any diet as a preventative measure and as a means of slowing metastasis of cancerous growth. The most extensive research on turmeric’s cancer prevention effects has been on colon cancer, but other types of cancer research related to curcumin are currently underway.

6. Detoxification of the Body

Turmeric and its active organic compounds have also been found to improve liver function and reduce the levels of toxicity in the body. By stimulating the lymphatic system and ensuring that toxins are removed efficiently, the antioxidant activities of turmeric are an ideal solution for liver ailments or toxicity.

There are a few different angles by which turmeric can boost your cardiovascular health – curcumin and vitamin B6. Vitamin B6 can efficiently inhibit the production of homocysteine, which is a negative bodily byproduct that seriously damages cell walls. These weakened walls can cause a number of complications in the heart, particularly when exacerbated by high blood pressure or plaque build-up. Secondly, curcumin directly balances your cholesterol levels by eliminating excess LDL (“bad cholesterol”) from the arteries and blood vessels. This can help to prevent atherosclerosis, so when combined with stronger blood vessels, turmeric represents a comprehensive solution for a wide range of heart issues.

In traditional medicine, turmeric was often relied on to boost cognitive abilities, increase concentration, and boost memory retention. Many of those traditional beliefs have ended up being legitimated by research, and turmeric is still considered a brain boosting herb. Aside from increasing general cognitive ability, it can also protect the neural pathways from long-term oxidative stress and the build-up of plaque. As a powerful antioxidant herb, turmeric can stimulate neural activity and prevent cognitive degradations, which often comes in the form of Alzheimer’s anddementia. Numerous studies have shown that curcumin is highly efficient in clearing out amyloid plaque, which is a major indication of Alzheimer’s progression.

Curcumin truly is a versatile substance, and the research has even stretched into its effects on the hormonal balance in the body. Studies have shown that curcumin has a similar effect as Prozac on patients suffering from depression, mood swings, anxiety, and stress. This makes it a powerful alternative to pharmaceutical routes, which often have dangerous or addictive side effects.

Although not commonly considered to be an allergenic substance, turmeric can have certain side effects on the body, including nausea, dizziness, or diarrhea, particularly when consumed in large quantities. In limited cases, excessive amounts of turmeric consumed in a medicinal capacity have caused heart irregularities. Always speak to a medical professional before adding a powerful substance to your diet or supplement regiment, and remember – everything should be taken in moderation.